"Mass (Latin.missa; Fr. messe; Ger. Messe; It. messa; Sp; missa) is the ritual of the Eucharist,  primarily in the Catholic Church." (1)

Josquin des Prez Mass and historical background:  in the beginning of the Fifteenth Century, a new practice arose in the compositional approach to the Mass: the singing of the five main sections of the Ordinary (Kyrie, Gloria, Credo, Sanctus and Agnus Dei) as a musical cycle.

The first cyclic masses, Rex Saeculorum and Alma Redemptoris Mater, can be attributed to John Dunstable and Leonel Power.  A common cantus firmus in the tenor served as a unifying device between the various sections of those works.  The material for this cantus firmus was usually derived from the outside the Mass Ordinary;  it was mainly a:

"pre-existent melody that was used as a basis for a new polyphonic composition." (2)

The sources for those pre-existent melodies varied:  Gregorian plain chant as well as secular chansons served as material.

The influence of Renaissance on the Mass, as opposed to that of Middle Ages, is of crucial importance.  In Medieval polyphony, rhythm played a significant role:  melodies were composed of successions of repeated rhythmic patterns.  The combination of these rhythms was more important than that of the melodic material. Rhythmic patterns formed the melodic line which, in that way, was composed successively while the music was not devoid of dissonance.  As a matter of fact, dissonance of any degree was tolerated.

Quite the contrary, consonance, free use of melodic line and avoidance of rhythmic accents dominated the musical style in Renaissance.  In the so-called International Style, a continuously flowing melodic texture prevailed.  Rich and resonant sonorities and steady pulse called tactus, became further characteristics of that style.

The polyphonic cyclic mass, with the elements discussed above and a cantus firmus forming the basic structural material for large-scale musical architecture, became the most elaborate musical form in both Early and High Renaissance.  The Josquin des Prez Mass provides some of the best examples of this new form.

Josquin's reputation was remarkable during his lifetime.  The first publication of his works was done by Ottaviano Petrucci.  Petrucci published three volumes containing Josquin's masses exclusively in 1502, 1505 and 1514.  The titles of these volumes were:  Missae Josquin, Liber Primus, Secundus, and Tertius.  It was quite unusual for that period to publish volumes with works by a single composer;  this alone shows the recognition of Josquin's compositional work during his lifetime.  It is of great interest that in 1711 Andrea Adami in his Osservazione per ben regolare il coro dei cantori della Capella Pontifica, published in Rome (1711), would still refer to him as :

(The greatest luminary of this great science from whom have learned all contrapuntists who have come after him.)

The Josquin Des Prez Mass started to draw attention among scholars:  a revival of that reputation took place towards the end of the Eighteenth Century with Burney.  Burney, as well as A.W. Ambros (1868) analyzed Josquin's music thoroughly, contributing greatly to the later interested scholars.

In the Twentieth Century, Albert Smijers selected Josquin's works for a monumental edition which was completed by Antonowycz and Elders.  Josquin's scholars include Charles van den Borren, Friedrich Blume and Helmut Osthoff.

Although Josquin Desprez is generally famous for his motets, his masses display all of the compositional techniques of the Renaissance and, at the same time, experiment with new possibilities.  From this point of view, Josquin can be regarded as a highly important composer and innovator in the composition of the Mass.  The Josquin des Prez Mass displays many of these innovative techniques.

Josquin was a professional singer.(4)  The extended melodies in his masses and motets would be appropriate for solo singers if not for virtuosos.  However virtuoso his vocal writing might have been, Josquin was a man of deep religious conviction and for him the glory and splendour of the voice had to reflect the glory of God in heaven and earth.(5)

Wide-spanned melodies are found in abundance in the Josquin des Prez Mass and less in his motets and chansons;  more frequently they belong to later works.  The restless voice movement and unstable rhythm are features of the young Josquin, still well grounded on Ockeghem's tradition.

In his later masses, such as Missa de Beata Virgine and Missa La sol fa re mi, wide-spanned melodies show an interesting technique.  The voice rises:

"repeatedly from the same starting point to higher and higher degrees of the scale." (6)

Another interesting compostitional technique applied in the masses is the use of chains of sequences.  Josquin, opposing Tinctori's dictum where frequent repetition is not permitted, intensifies the musical climax through prolongation of the same passage.  In the Pleni sunt of the Missa Hercules Dux Ferrariae we have one of the best examples of this technique.

Sometimes the musical intensity is increased by the modification of reiteration through shifting of accents, extension or variation.  An example of this technique is the first Kyrie of the Missa de Beata Virgine.

A further feature of Josquin's compositional style is his attempt to underline musically the meaning of the texts he sets.  For his remarkable espressivity in word-painting, he can be regarded as a forrunner of the later Baroque style.  However, this feature was mostly used by Josquin in his motets;  the ritual rigidity of the Mass Ordinary did not permit such subjective expression.  Therefore Josquin's masses show more of his conservative craftmanship.

The motto-technique refers to the:

"identical or similar beginnings of the major movements in all voices." (7)

Examples of this technique used by Josquin can be found in his masses Ave Maris Stella, Ad fugam, Di dadi and L' ami Baudichon.

a)  Structural Cantus Firmus.  This technique refers to a:

"basic melody laid out in rigid patterns, normally assigned to the tenor and thus embodying the historical continuation of the earlier tenor cantus firmus of the 14th century." (8)

b) Elaborated Cantus Firmus. In this technique:

"a borrowed melody, usually a plainsong..assigned to the highest voice in a three-or four-voice texture, is presented in an elaborated version with notes interpolated between the original melody notes." (9)

1) The New Grove Dictionary of Music and Musicians, s.v. "Mass". 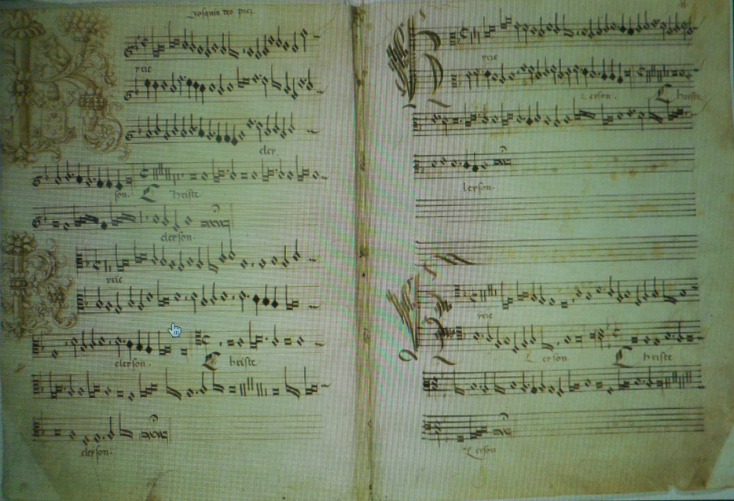 Pythagoras Biography, provides crucial information about the most famous of the pre-Socratic philosophers. Pythagoras, the Ionian Greek scientist, mathematician, politician, religious and moral reformer, is also known as a great mystic and founder of a religious circle under the name Pythagoreanism.