As Influenced by the Composers of the Eighteenth and       Nineteenth Centuries

The development of modern piano:

the practical invention of the modern piano can be attributed to the Italian maker Bartolomeo Cristofori.  Cristofori borrowed the action (struck string) of the harpsichord mechanic to form a new instrument that permitted: (1)

"...the production of a sound more or less powerful...according to the degree of force with which one depresses the key...Not only piano and forte are produced, but also various degrees of loudness."(1)

This was the description of the new instrument as it appeared in the Giornale dei litterati d'Italia (1711) in Venice.  The instrument was called gravicembalo col piano e forte (harpsichord with loud and soft).  Later terms, such as pianafote, fortepiano and pianoforte were used as shortened forms of the original name given to the instrument by its maker.

The sources that refer to this invention show no doubt about the name of the inventor.  The year of the invention, however, is not clear.  Larousse (2) indicates the year 1709, while Britannica (3) refers to the 1690 and The New Grove (4) to the year 1698.  At any rate, there exists a detailed description of an arpicimbalo in an inventory of the Medici instruments for 1700.  This proves that, by then, Cristofori had completed at least one instrument of this kind. (5)

Until about 1770, pianos were still in transitional phase.  There were very few buyers, therefore makers were not yet manufacturing them regularly.  During the next sixty years, several influences accelerated the development of modern piano:  the pianoforte was to acquire power and expressiveness and become the center of domestic entertainment and a symbol of social status.

The modern piano, with its massive metal frame that supports the extreme tension of the strings (up to eighteen tons or 16,400 kg), its soundboard, bridges, action, and three pedals was the result of numerous experiments on the part of piano manufacturers.  The impressive innovations of the new instrument are partially due to the extensive demands of the composers of the eighteenth and nineteenth centuries.

By 1780, the piano was fully established as the most preferred of the keyboard instruments.  Two different types were in constant rivalry:  the English and Viennese.  The English pianos, (with John Broadwood & Sons, Limited, as their main manufacturers) had a stronger, heavier and deeper sound than the Viennese had, but were not very successful in repetition.  On the contrary, the Viennese instruments, with Johann Andreas Stein as their main innovator, were well balanced between the treble and the bass register while the touch was light and shallow.

The Viennese pianos were perfect for Mozart's style.  The smoothness of execution of the flowing passages and cantabile (or singing) tone that Mozart himself required were all possible on that instrument.  These effects were possible only on a pianoforte and not a harpsichord.  Mozart's writing is rich in orchestral sonorities, something impossible for the thin sound quality of any of the earlier keyboard instruments.

The English piano was to undergo further development while the Viennese piano, already perfect in its structure, only deteriorated.  The Viennese piano of the 1770s still remains the ideal instrument for performances of Mozart.

After 1800 and until 1859, the fortepiano underwent further development.  Pianists and composers seemed to be more and more demanding and manufacturers would usually seek them out for new ideas to further develop the instrument.  Thus, the development of modern piano was only possible via these interactions.

"His fingers fell on the keys as large drops of rain that spread themselves like iridescent pearls." (8)

Schubert was one of the composers who appeared to be satisfied with the Viennese pianos. Their light touch, gentle singing tone and pedals were far more preferred by him than the later grand pianofortes with their orchestral volume.  Schubert, having been influenced in his piano writing by Haydn and Hummel, gives no indication of virtuosity.  He, too, like Mozart, exploits the orchestral coloring of the Viennese piano imitating flute and piccolo sounds in the higher register.

Robert Schumann, unlike other composers of the nineteenth century, did not influence the further development of modern piano.  He seemed to be content with the instruments of his time:  he did not exploit the potential of pianistic sonorities as his contemporaries Chopin and Liszt did.

Clara Wieck, who became his wife, was a virtuoso pianist whose profundity of expression distinguished her from other pianists of her time.  She preferred the Grotrian-Steinweg piano to all others, mostly because of its singing tone in the treble register.

Frederic Chopin was less responsible for great innovations on the piano.  He, like Schumann, seemed to be content with the pianos he performed on.  His music did not need the orchestral effects of the German School.  According to A.M.  Diehl:

"His fortissimo was the full pure tone without noise, a hard inelastic tone being to him painful.  His nuances were modifications of that tone, decreasing to the faintest yet always distinct pianissimo.  His singing legatissimo touch was marvelous.  The wide, extended arpeggios in the bass were transfused by touch and pedal into their corresponding sustained chords, and swelled or diminished like waves in an ocean of sound". (9)

Chopin liked the Broadwood;s Boudoir cottage pianos of that date that were two-stringed, with sweet sound.  To Liszt Chopin said:

"When I am in a bad mood, I play on Erard's pianos and on them I can easily find a sound ready made.  But when I am feeling in a good mood and strong enough to find my own sonorities, I use the Pleyel's pianos." (10)

Chopin also admired the Graf pianos, while he was staying in Vienna.

Unlike Chopin, Franz Liszt influenced the development of modern piano immensely.  His own compositional evolution from pieces influenced by Czerny to late works like Nuages Gris and Unstern is remarkable.

Liszt was very strong physically and possessed long flexible fingers and long thumbs.  He often used the power of his whole body to produce immense dynamic contrasts.  Liszt's keyboard tuttis had often damages the strings of the old pianos.  After  concert given by Liszt, Camille Mooke-Pleyel would say:

"I contemplate the battlefield. I count the wounded and the dead". (11)

That does not mean though that Liszt lacked finesse and subtlety in his playing!  His constant experiments to imitate the wind, the sea, fountains bells or any sound of nature enabled him to exploit the deepest resources of this instrument leading to even more innovations.  His ambition was to acquire on the piano the virtuosity of Paganini.  Glittering scales and arpeggios became characteristic of his piano style.  After an orchestral concert conducted by Berlioz where the "March to the Scafford" from the Symphonie Fantastique was performed, Liszt sat at the piano and played his own version for the solo piano that sounded even more powerful that the orchestra had sounded!

1) The Larousse Encyclopedia of Music, s.v. "The Pianoforte". 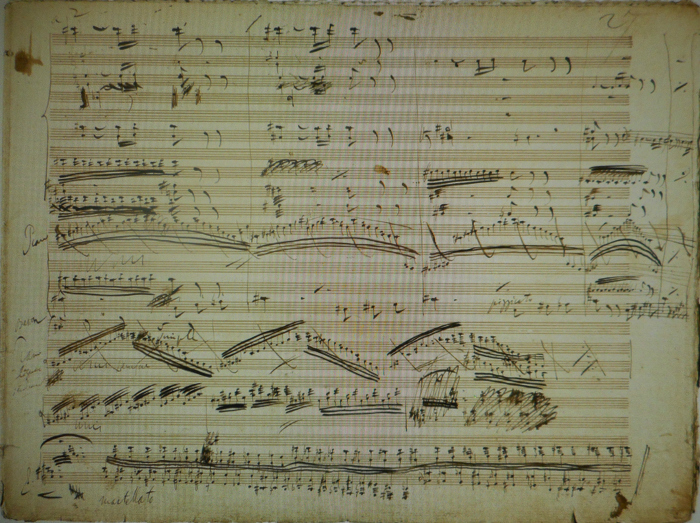 Articles that appear here form my Music Niche! Additional ones will be added on a regular basis.