Fashion-design has always been as natural to me as breathing: it started in elementary school and, since then, has never ceased to amaze me. My other passionate occupation of that time was the production of eccentric city designs (plans).

The above drawings represent my Graduation gown!  Actually, Mr. Dimitrelis (owner and head of the Dimitrelis Fashion School of Thessaloniki) insisted that I prepare TWO evening gowns: they were shown at the end of the show. As a special talent (one that, as he put it, the school had not seen in its 32 years of existence-by then) I was required to present double the load. And, it was very expensive. My mother (who, at the end, did all the sewing-because the woman we hired could not work with...patterns!) insisted that I buy the best material. So, it was black taft of the most exquisite quality, and gold for the stripes (also extremely expensive). I have kept this dress: I will never sell it, because it does belong to a museum. It's not an evening gown: it is pure art made of fabric

Since 2010, Katerina has been chief designer of the Sxisma Fashion House, using various online platforms to create hundreds of fashion items, including home décor. These products can be found in abundance by googling the term “Sxisma Fashion.” However, her creativity encompasses far more than these platforms would indicate. She has commented often about the simplicity of available patterns and the commonality of materials.

The publication of her visionary designs fills this void. She has accepted our representation and now feels free to design according to her wishes and take her innovative ideas as far as she is able. We could not be more pleased.

The Collections of this series of books are published with the fashion design student, professional designer, manufacturer, and fashion lover in mind. The designs are completely original and have only been partially realized as physical products. This makes them invaluable for the following reasons:

1. You will be inspired for the creation of your own collections.

2. You will be encouraged to use portions of these ideas for your own purposes.

3. Fashion Design ideas will inspire painters, architects, and other visual artists.  Katerina states that they even inspire her in music composition!

4. We have omitted “suggested materials” due to the fact that each design can be realized in myriad ways. We will never stand in the way of your creativity.

5. Each Designer Collection consists of 25 original designs, depending on the central theme, with or without accessories.

6. Each Designer Collection is published every second or third month (on the 13th, Katerina’s “lucky” number).

7. Each Designer Collection features a specific theme, with some themes being the continuation of others.

8. The “continuation of theme” stated above (and further transformations of similar ideas) can facilitate the creation of a series of your own collections: the particular process may be called structural design and can be invaluable to the creation of all forms of art.

9. Considering their originality and taking into account the fact that these designs represent potential “gold mines” in terms of profitability in the manufacturing industry, easy access to these ideas is priceless.

10. Note for interested manufacturers: the designs are copyrighted. If you are interested in putting them into production individually or as a group, you will need to purchase a licensing clearance (contract). The cost depends either on the number of items produced or on a certain period of production (usually two years). Please indicate your preferences by using the “contact” button on our website (katerinastamatelos.com). We are open to all types of collaboration.

The books will be for sale here, on this website, just by clicking (at your left) on the button "Sxisma Publishing."

During my adolescence, and while being extremely busy with the full load of a very demanding school (The American College 'Anatolia' of Thessaloniki) plus the piano lessons (and full music major curriculum) at the State Conservatory, I decided I wanted to study fashion design! So, I enrolled in a correspondence course at the Veloudakis Fashion School in Athens. By the end of the course (I was 16 years old by then), Mr. Veloudakis suggested that I send my designs to a fashion magazine for publication. Ι did not do this but, two years later, the fashion magazine GYNAIKA (Woman) announced a Panhellenic contest for non-professional (young) designers: the winner would then compete at a European level, and three participants would be chosen to work at famous fashion houses in Paris! I entered the competition and was chosen among the first ten. According to the contest's rules, I had to 'realize' my designs: my father came with me, while I traveled to Athens. As "my" fashion model, I was given Efi Mela (the most famous one at that time). I still remember my awe, as I was looking up this immensely tall and impressive woman. But, during the interview sessions, I realized that this was not 'my' world: and, since I was a piano student at the same time, I urged my father to return to Thessaloniki before he would have to spend two salaries of his (!!!) for the realization of my three chosen fashion designs. Of course, now I do think quite differently: given the opportunity, I would most certainly invest the time into creating my own fashion line, or at least work as a freelance fashion designer. But, maturity comes later in life.

Several years passed and I followed the path of music. Then, suddenly in 1990, I accidentally met Mr. Dimitrelis, owner of the respective fashion design school of Thessaloniki. I told him right there my short 'fashion story' and he invited me to bring my designs to his office. He literally told me that I was a "born-fashion-designer" and I was offered the opportunity to study this subject (a two-year degree) under a unique deal: to pay for ONE year, but attend ALL lectures of both years. While this WAS a great (financially at least) opportunity for me, the load of work was truly immense. I ended up with an attendance and work load of about 50 hours per week, just for the Fashion degree. During that time, I was also a full time professor of piano with a weekly teaching load of 20 hours. I did NOT mind the hard work, but I was wondering how on earth I could practice the piano as well: there was just not enough time. So, after pondering for about 5 minutes (my usual 'speed' in decision making!), I decided that Fashion Design had always been a unique passion of mine that had been largely neglected. I therefore decided that it was about time to take care of this inclination of mine, too. And, before making myself a nervous wreck by trying to fit piano practicing into this horrible load of work, I just 'shut' the lid of my piano for the upcoming 9 months of studies and thought: "well, a baby needs 9 months to grow-this is MY baby now and it needs my full attention." And, this is how I entered this field officially.

The year of my graduation (1993) was under the influence of the 'orient': my inspiration came from the Swayambunath temple of Nepal (the cupola, in particular).

Below are the two designs as presented during my graduation. The first one, inspired from Nepal, was fully realised as shown above minus the...hat! I regret this now: I should have gone into all this trouble, as it was unique. The second design, inspired by Japanese kimonos, was NOT realized as planned: the original design had an open back, but the model did not have a totally straight back needed for this. So, I "compromised" for a design of the 1920's (luckily accepted as a choice of theme) in black and white (which is my favourite combination). The materials, Italian, were also exquisite and very, very expensive. 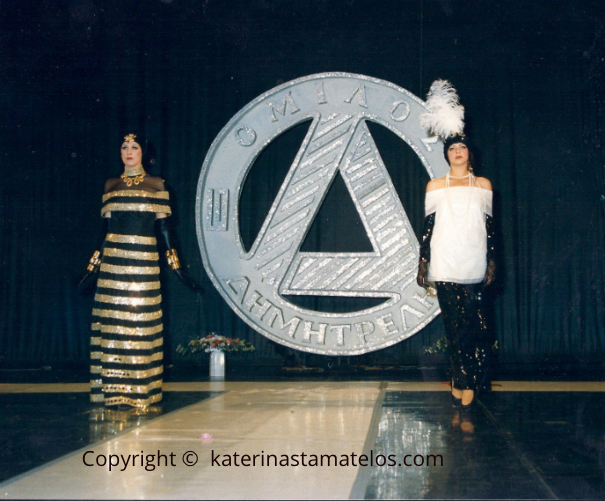 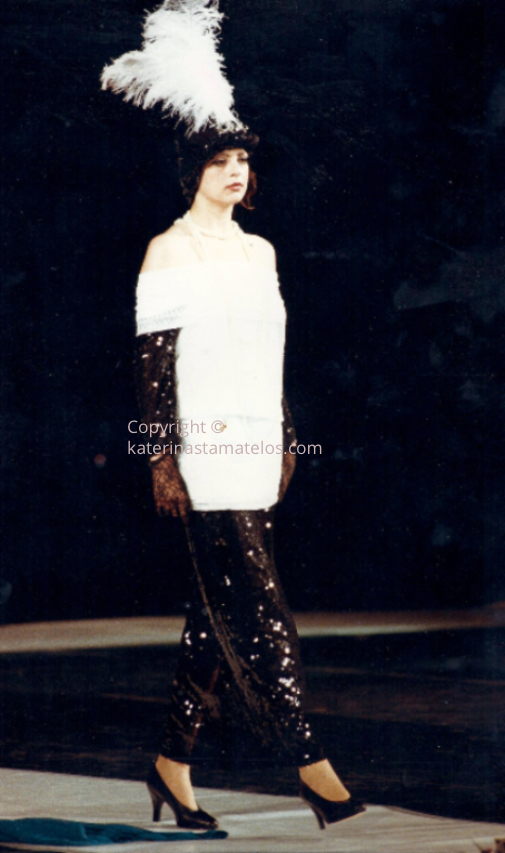 And, below, it's me (at the centre) dressed also in "oriental style," with two of my teachers (both around...my age!). At the time of graduation, I was 42 years old. 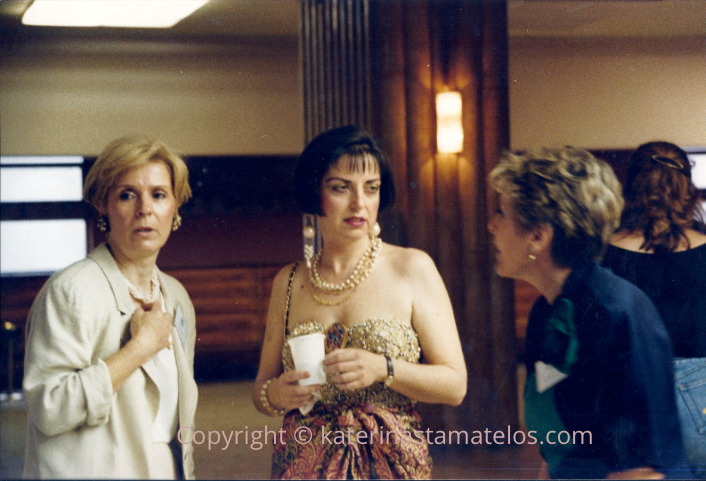 About the fate of my graduation dresses: did I use them, sell them, etc? Well, the first one (at the left) I would NEVER sell: it was a masterpiece of craftsmanship and I keep it in a drawer. I could never wear it either, as I am rather short (I would need to grow by 20 centimetres to fit in). From the second one, I have used the skirt, with a slit at the side, during two solo piano performances: one with the State Orchestra of Athens (performing the Khachaturian piano concerto) and the other with the State Orchestra of Thessaloniki (performing Prokofiev's piano concerto No. 3). I did not use the top, as it was very tight and I needed to move my hands freely. The skirt was very comfortable and I have combined it with an expensive top designed by Oleg Cassini (the designer of Jackie O!). It was made of black chiffon and decorated with black pearls: I had bought it in LA, USA, at a fairly good price.

An interesting fact: my fashion graduation took place at the big concert hall where I had made my debut as a convert pianist 22 years ago!

A special note: at the graduation, being used to act as a musician, I stayed 'back stage' for support. All of my classmates were smart enough to watch the show from a seat in the hall. I was told that, as the model (dressed in Black & Gold) turned her back to the public, the golden stripes formed golden...circles! They said that the impression was stunning. A tip: the golden stripes were sewn over stripes of thin foam: this made them look and feel as a sculpture (or, as the cupola of the Nepal temple, the original inspiration of the design).

Final note: during these nine months of intensive fashion studies, my piano students (mostly in their twenties) would get really excited about my new fashion career prospects! They used to tease me by telling me that I should, from now on, put on all concert programs a note saying 'for ordering evening gowns, please contact us separately!'

And Our Gorgeous Boyshorts Women's Underwear!

Our Designer Clothes Will Make You Look and Feel Fashionable and Stylish!

This special collection consists of clothes that are handmade to order in London, UK!

All Sizes Included! (From XS to 5XL!)

More Sxisma Fashion pages will be added on a regular basis. You can subscribe to this feed and stay tuned with all the new products (or other interesting web pages) that are coming up!

Sxisma Fashion brings to the public the innovative and unique designs of Katerina Stamatelos. Our Fashion Line includes everything: from casual to luxury wear! Our Head Offices are situated in Manhattan, New York City.