Finally, and after becoming more and more aggressive, the "Anathema" dissolves itself, while the last variation of the "Kyrie Eleison" flows into the Invocation: a simple, Adagio religioso procession. 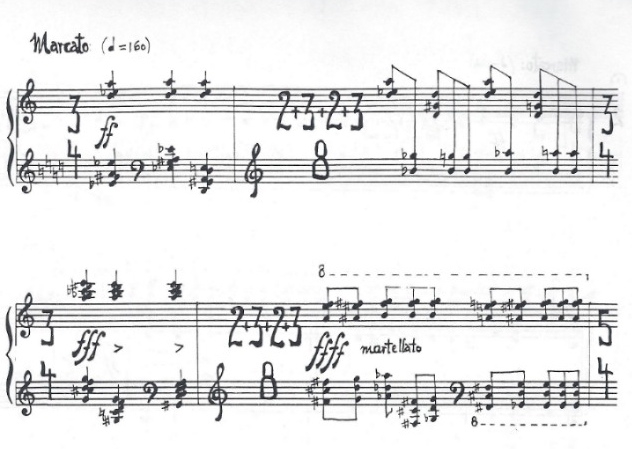 An 'Anathema', op.4: Past Concerts

An 'Anathema', op.4: Notes From A Performer's Perspective

Katerina and I “met” on Twitter! Both she and her work sounded interesting, so I visited her web site to read her bio and listen to some of her compositions. Once there, I discovered that she is also a pianist, a painter, a poet, and a fashion designer!

I feel a connection with her through the University of Iowa, where she earned two of her degrees. I grew up 75 miles from Iowa City, attended music camp there 4 times beginning in 7th grade, and studied piano and organ there in high school.

After looking at this piece several times, then putting it away, these concerts came along. I’m so happy to be programming Katerina’s beautiful piece!

Here the challenge is learning the composer’s style with no previous knowledge. Beyond that, some of the tempi are fast. The fastest marking is quarter note = 168.

When learning chordal passages in traditional music, I “block” the hand positions and practice getting to each spot early. With triads and inversions, that becomes standard procedure.

In this piece, the Kyrie has variations. In addition, the Anathema has its own variations. As you can imagine, the possibilities for alternating sections are many.

The Anathema is fast, and faster with each of its new sections. These alternate with, or are interspersed with, the Kyrie theme.

The performer has to be alert and ready to go. No matter whether the practicing is at tempo or slower, I practice the transitions every time. If you arrive at the beginning of a section late, insecurity immediately gets in the way. I’m practicing for success. Switching from slow to fast, and also not waiting after “making it” to the end of a fast section, are crucial to the flow of the music.

Katerina Stamatelos, VARIATIONS and INVOCATION upon a "Kyrie Eleison" and an "Anathema, Op. 4

Following Katerina Stamatelos’ piece, I asked for a show of hands from people who liked part of it. It’s a retirement home, after all. Several people did! And one resident told me afterwards that she has been to Greece, and she loved the whole piece. She hadn’t expected to get into anything that was in homage to Bartók.

The Amherst Concert: From Gretchen's Blog

When I said that I’d “met” Katerina Stamatelos on Twitter, some people said, “Oh!” Others smiled ~ all looked intrigued. I told them that Katerina lives in Greece and earned 2 degrees at the University of Iowa, and why I felt a connection with her.

Everyone in the audience loved this piece! Big smiles, long and enthusiastic applause, true appreciation without reservation.

The NYC Concert: From Gretchen's Blog

I grouped the Liszt and Stamatelos together with the goal of introducing Katerina’s piece with Liszt’s “Nuages Gris.”